LET'S GET READY TO WRESTLEEEE! 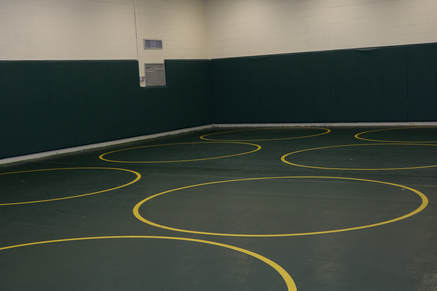 The wrestling room is set up and ready to go as the new season is underway.
By Hayley Sutton

Yes, wrestling season is starting again at North Central and not only are the coaches ready, but the wrestlers themselves are hyped up for this year’s season.

This season all the wrestlers and the managers are buckling  down with a ‘no time to play’ attitude, and they have high expectations for this year. With a new assistant coach and many new wrestlers, this year’s team looks pretty  intimidating, and the players are all working extra hard this year to get to the championship.

The team seems to get along pretty well, even with all the new members. “They’re crazy, but they’re all like my little brothers,” says the only girl on the wrestling team, senior Paula Velez, who also has  high expectations this year for her whole team. She thinks that everyone is more prepared this year, and no team will stand a chance against North Central.

Most, if not everyone, is saying that the wrestlers are working harder than they ever had before, and they are determined to win the championship, no matter what comes their way. “I don’t think the other teams are on the same level as us,” says senior, Karmen Sutton, one of the wrestling managers. She and many others think North Central will dominate this year’s competition, so watch out opposing teams; we’re out for blood this year.

The wrestling team isn’t one to mess with. They are bigger, smarter, and a lot tougher than they were. Good luck wrestlers, North Central is cheering you on!

HOW OLD IS TOO OLD TO TRICK-OR-TREAT? 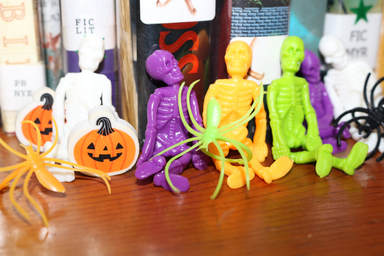 Halloween on the shelf
By Ryan Hodge

Halloween is arguably one of the most anticipated holidays, especially for those with little or no family to have with them during the family oriented holidays, as all you really need is some candy and a horror movie to celebrate. There are many ways people celebrate Halloween from the aforementioned simple version of candy and a scary movie, to dressing up and handing out or collecting candy, or scaring others. Mrs. Moxley is one who celebrates by decorating and dressing in a festive way.

One problem that occurs during this holiday is that decorations and costumes can sometimes be too scary for kids or just overwhelming in general.
Mrs. Moxley is not alone in her beliefs that 13 or so should be the cut off for trick or treating, stating that, “It’s not fair for the big kids to be competing with the little ones. I like the idea of individual costume parties or school dances in costume.” She also mentions that it is dangerous having people in masks hiding their identity while there are kids running around.

For most people, candy and costumes are a big part of the holiday. On one hand, it is marvelous to show off your terrifying costume to your friends who are interested in that kind of activity, but on the other, it becomes a problem when young children are given nightmares because they saw someone walking down the street in costume.
​
Both sides have valid points, but what you decide is right or wrong is up to you. Whichever way you go, have a wonderful spooktastic Halloween! 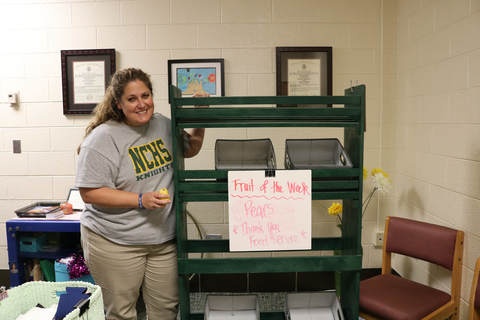 Mrs. Montgomery stands proud next to the fruit cart and is excited to pass out fruit to students.
By Abel Mota

In a recent article by Karen Kaplan for the Los Angeles Times, “New survey data from the Centers for Disease Control and Prevention (CDC) show that 36.6 percent of us eat some kind of fast food on any given day.” Assistant principal, Mrs. Montgomery, has set out to help North Central solve unhealthy eating by serving fruit at the bus port every Tuesday and Thursday. The program’s main focus was to give a healthier option to students before their long bus rides, instead of grabbing a bag of chips when they get home.

The wonderful fruit is selected by what is in season. “That’s how we want students to learn,” said Mrs. Montgomery. She wants students to become more knowledgeable about local produce. She mentions that the program is doing very well.

This program has been made possible because of the WISE grant from the BCBS of South Carolina Foundation. With the grant in mind, Mrs. Montgomery partnered with LiveWell and students to brainstorm the best ways to use the grant. This grant is only for a year, and the school has to figure out ways to sustain it.

People also volunteer to get fruit for the school, such as Laurie Funderburk, Democratic member of the South Carolina House of Representatives. In addition, Mrs. Montgomery is trying to work with a local farm. She says that we need more people to hand out the fruit. Izabella Baipho, who interned for the club, mentions that, “We are trying to expand, not just to the bus port, but after school athletics and the car riders, too.”
​
With trying to make our school healthier, the ones who are in charge of the LiveWell fruit program believe they can make it healthier and students will eat more fruit and less junk, which will inform students about new fruits. If you would like a nutritious snack before leaving school, stop by the bus port on Tuesdays and Thursdays after school for a healthy treat.

Guest speaker events have become a familiar routine during Friday advisory at North Central High School. Always held in the auditorium, they provide a change in habit, and a chance to experience a live speaker.

When talking to Mr. Horton, he revealed the reason that these events started. He explained, "Instead of having a classroom lesson every Friday, we thought students would enjoy having a guest speaker.”

The advisory committee consists of Mr. Horton, Mrs. Oliver, Mrs. Kirkland, Mrs. Helms, and First Sergeant Parish, and they determine the guest speakers for the monthly advisory events. They collaborate to find a great speaker to offer their own speech or to speak about a specific topic, such as the prison speakers from last year who reflected on where they went wrong in order to teach students to make better decisions.
​
Guest speaker events are meant to engage and inspire the student audience. These events have been doing just that, leaving a positive impact on the student body of North Central High.