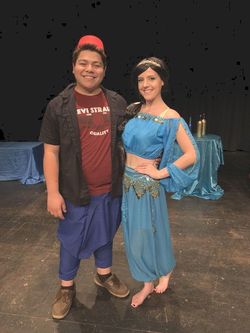 Jared Chavez (Aladdin) and Brandy Atchison (Jasmine)
by Olivia Walsh
​Lights, camera, action! North Central High School’s drama classes are bringing a classic Disney tale to life; the students are putting on a production of Aladdin on May 4 and 5. For months, Mrs. Johnson and the drama students have been working hard on their lines, choreography, and singing.

Mrs. Johnson, NCHS’s drama teacher and the director of the show, states that the best part of working on the play has been getting involved with new kids. Most of the students that are performing in Aladdin are band students who have not taken drama before, so she has been able to watch them grow as actors and actresses.

When asked what she was most nervous about, Mrs. Johnson said, “The kids forgetting their lines and choreography.” One person messing up a line or getting out of sync can throw everyone else off; it is important that everyone plays their role to the best of their ability. The students have been practicing endlessly to improve their acting skills and memorize their parts so that they can have as few mistakes as possible.

Jared Chavez, a sophomore at NCHS, is playing the part of Aladdin. Jared says he resembles his character because, “I’m a funny person, brave, and adventurous.” Chavez claims that the best part of working on the play has been meeting new people and trying new things, because this is way out of his comfort zone.

The part of Jasmine is played by Brandy Atchison, an NCHS senior, who Mrs. Johnson claims is the most similar to the character she plays. She says, “Jasmine is independent and wants equality for everyone, and I see that in Brandy.”

According to Mrs. Johnson, the most shocking parts of Aladdin will be the choreography and the amount of talent possessed by students who have main roles and have never done something like this before. She chose this play specifically because she is a huge Disney fan, and they decided that Aladdin was something they just had to do.

Actors are an important part of the play, but another big component is the props. Ms. Foreman, the art teacher at NCHS, has been working on making the props and letting her art classes get involved. They have made treasure chests, genie lamps, fruit for the fruit stands, and much more. Ms. Foreman has also been working on the Cave of Wonders head for Aladdin to walk into.

Foreman enjoys working on the props because it is different for her; she has never done set design before. She remarks, “This is really out of my comfort zone because everything has to be so big, but my class seems really excited about the stuff that they’ve been working on, so it’s been fun to see things come together.”

Ms. Foreman agreed to work on the set to carry on the tradition of art teachers helping with the play. However, it has turned into her personal desire to work on the set because she enjoys the story of Aladdin and it is fun to do. Foreman says that she wanted to add something to the play, and the set is an important part.

The cast of Aladdin at practice.

Are You a Drug Addict? 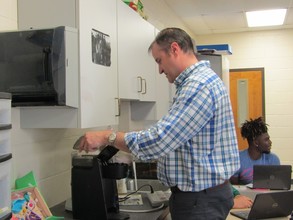 Charles Bolen making his 8th cup of coffee of the day during his 4th block class. He says, "Don't judge me, its legal. I'm safe to drive."
by Presley Springfield
Drug addiction is a term most people are used to hearing. Drugfacts.gov says “an estimated 24.6 million Americans aged 12 or older—9.4 percent of the population—had used an illicit drug in the past month.” The most common drug in this data is marijuana.

As a high school student, this didn’t come as big surprise to me. Although, I definitely feel like there is one drug that is way more popular and worthy of the first place position. This particular drug is used by approximately 90 percent of Americans, according to villanova.edu, and has side effects including: migraines, insomnia, nervousness, irritability, and more. Not to mention this drug is highly addictive, and many don’t even realize it. This drug is caffeine.

Caffeine has been around for ages, and it became even more popular throughout the recent years, as it can be found in pretty much anything, including chocolate bars. Due to this, many people have become dependent on caffeine and suffer from serious addictions. According to school nurse, Regina Bowers, people who are extremely caffeine dependent can even suffer from withdrawals when caffeine is not in their system. People have become medically ill due to caffeine withdrawals. This is why it is important that people who have such an addiction to gradually cut back on their caffeine intake, as opposed to stopping all together.

One of the most known cases of caffeine addiction at North Central is biology teacher, Charles Bolen. Mr. Bolen’s caffeine addiction started back in his teenage years. He says, “I, like many teens, enjoyed soda. My addiction to caffeine got stronger when I got to college and began drinking coffee by the pot while studying.” Mr. Bolen believes that his caffeine addiction streams from his love for coffee. He has even gone to the extreme of pulling a used k-cup out of the trashcan just to see if he could get a little more coffee out of it.

When asked if he would eventually lessen has caffeine intake, Mr. Bolen said yes, he would. He is aware of the physiological effects of caffeine, and that other people should be educated on the dangers as well. Obtaining caffeine in large amounts can even be fatal. “Today we have energy drinks, soft drinks, and even caffeine pills. Yet, not many people realize that caffeine can cause high blood pressure, dehydration, and even death,” said Mr. Bolen.

Luckily, for those of you reading this that enjoy their caffeine, you don’t have to completely cut off your caffeine intake. Vox.com suggests not going over 400mg of caffeine in a day, but anything below is fine. However, you still probably shouldn’t consume caffeine on a daily basis for long term, unless you want to suffer the consequences.