HOPE THOUGH THE CHAOS
by Summer Martin 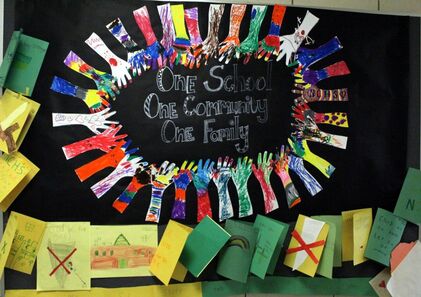 ​Poster made by an elementary school
On January 11, 2020, North Central High School was tragically hit by an EF2 tornado that left the school almost completely destroyed. The chaos left students and staff in complete shock and devastation. Seeing the school in person for the first time after the storm broke many hearts. Thousands of personal belongings were ruined along with what many considered to be their second home. North Central is a family, and when everyone is together the school feels like a second home for students and staff. It was a place where people could feel safe no matter what. When seeing that taken from them, they suffered a great loss.

The loss of the school left students and staff in a state of grief. Mrs. Ham, who has worked at North Central for almost 13 years, often finds herself missing the school.  She says, “North Central is an amazing place to work that feels like home for students, teachers, and the community.” In many ways, the move to the Camden ATEC building was difficult for her, but it had its benefits too. Mrs.Ham says, “I was thankful that we had another place to go instead of all of us separating. Of course, I would rather be in North Central, but I'm just happy that we can all be in the same location together.”

Along with the hurt, many people were also left in a state of confusion. Jennifer Owens, a sophomore at North Central says, “I was confused as to how only our school was impacted by the tornado. The middle school and everything else surrounding it was left untouched.” Although she's hurt by what happened, her concerns go out to the juniors and seniors. Jennifer believes, “It's harder for the juniors and seniors because they've been there longer and won't get to do milestone things in the high school as they would have before.” Times are a little harder for her now than they were before, but she won't give up hope on the Knight family. Jennifer has a strong opinion about North Central and says, “We’re a family, and there are always people to help. If I had an issue, someone would be there to help work it out.”

Students and staff have been through so much within the past month, but they haven't given up on each other. Sticking together is important during a tragedy, and the North Central family has done nothing less. Through the loss, they've stuck together and most importantly never gave up hope. North Central has been dearly missed, and it will stay that way until the school returns. The Knight family has their expectations set high for North Central's comeback, and they wouldn't expect anything less.

POUND THE BOARDS
by Jeniya Outten
As basketball season comes to an end, North Central High School’s girls’ varsity basketball team strives to do their best every day on the court as they put their all into it. As a team, they work together to earn every victory. They are a very diverse group, but they have the same goals overall and make the impossible happen through each season.

Coach Dawson, the varsity girls basketball coach, teaches the basketball team to not focus on their failure, but to revel in their wins. Player Melanie Hackworth stated that her highest point in the season was, “when we beat a private school that recruits their players- York Prep.” This expresses her passion for winning, but also shows that she is still humbled throughout the game.

Another memorable event from the season happened during the game against Lewisville.
At the game, senior Peyton Holley was recognized for scoring 1500 points in her basketball career at North Central High School.

When faced with challenging games, Coach Dawson says, “We stay together. The girls do a very good job picking each other up because we are a family. We believe in each other, and we don't lose faith.” In regards to staying motivated after losing a game, each player works harder to improve their mistakes, so that they can do better for the next game. Coach Dawson expresses, “You can't win at everything you do in life. We don't take losses; we just learn lessons, adjust, and keep progressing and moving forward.”

Come out and support our lady knights for the final game of the season on Friday, February 14th as they play at Buford. 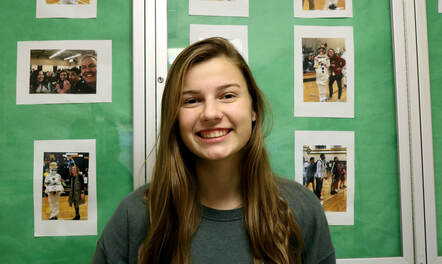 THE COMMITMENT
​by Preston O'Neal
Many students have joined the U.S. military from North Central’s JROTC program. These students include, but are not limited to, Aaliyah White, Aleigha Ross, Michael Broughton, and Seth Endter. From the sense of pride to the collegiate benefits, many things attract students to join the service.

Several seniors have made plans to join different branches of the U.S. military. Some of these students already have contracts with the military, while others may not but are still intrigued. They have different reasons for joining, such as Aleigha Ross, who joined the Air National Guard, because “I wanted to help people, and being able to protect and serve those who can't gives me satisfaction.” Others, such as Seth Endter, who plans to enlist in the Army, join for a sense of national pride, as he stated, “I love America.” Whatever drives them, these students are making a large sacrifice.

Some of these students join the military to improve the quality of life for themselves and to show others what they can achieve. Michael Broughton, for example, stated, “I wanted a chance to change my life for the better.” Others join to show others what they can achieve such as Aaliyah White who shared, “I feel like I am showing younger women my age that joining the military is not just for males.”

To strive for a better quality of life, either for yourself or others is another honorable thing to do. The U.S. military is extremely demanding, both in the mental and physical aspects, as well as the sacrifice it may require.  The sacrifice these students may make, as well as the rigorous physical training they must endure, is truly admirable.​ 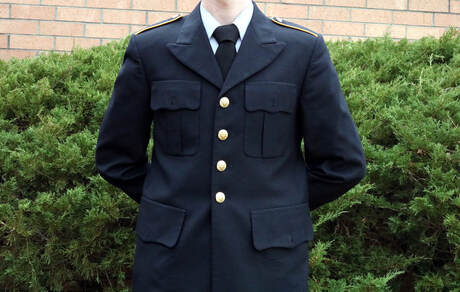